The life of Aeneas (imitating Plutarch’s style, but a lot shorter!) 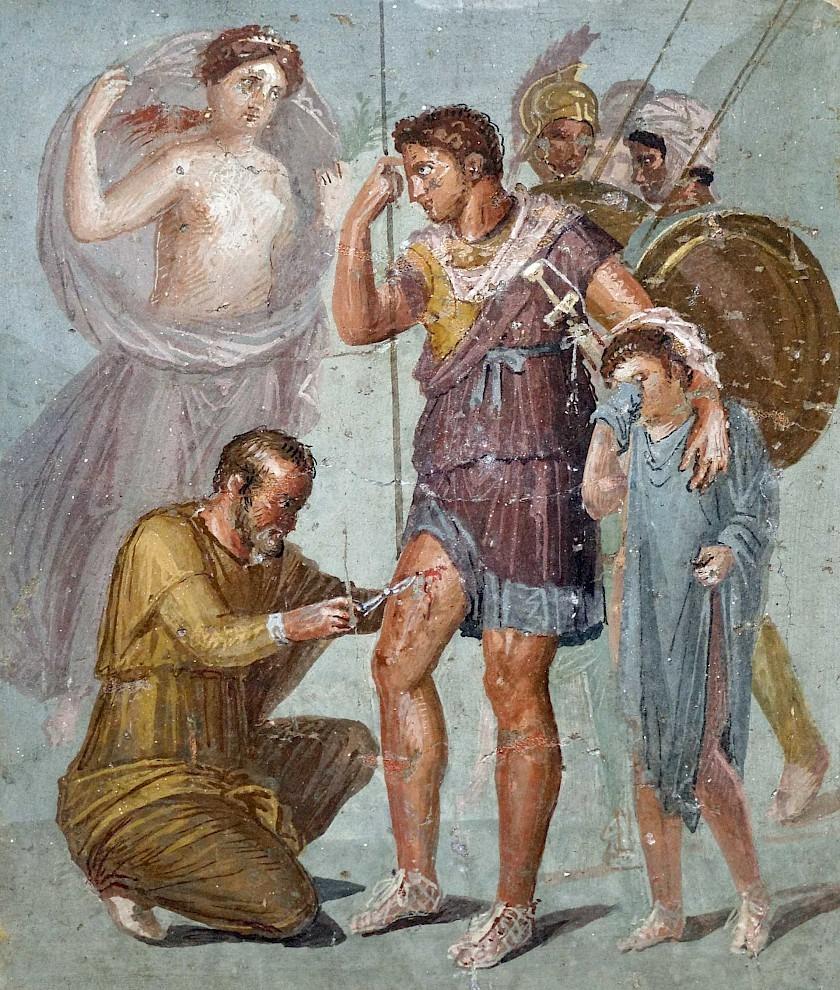 Aeneas, the Trojan prince of the house of Priam, was a descendent of Dardanus. His ancestor, Dardanus, was the one who founded Troy. The city is thus also known as Dardanus, Dardania, or Dardanium after himself. Dardanus is said to have descended from the gods. People say that Dardanus’ father was Jupiter himself. This makes Aeneas a descendent of the gods. Besides, of his parents, it is reported that Venus, the goddess of love, the daughter of Jupiter, was his mother by Anchises. Being a prince of such lineage, he was said to be destined for great things even after Troy was defeated during the Trojan war. He did achieve what he was supposed to, but not everything was great about how he went about fulfilling his calling.

Let us first return to the story of his homeland and the war that destroyed his city. The principal historical source of the war was The Iliad, or the story of Ilium, which is another name for Troy. Everybody knows about this story because it was recited by professional bards and finally got written down by the Greeks. Troy is the opposing side in The Iliad since it was written from the viewpoint of the Greeks. Nevertheless, the Greeks acknowledge the heroinism of many Trojan soldiers, and Aeneas is one of them. The Romans too have a heroic epic poem called The Aeneid, or the story of Aeneas, written by Virgil. In fact, it is the main source that reports the detailed life of the protagonist Aeneas.

During the fall of Troy, Aeneas killed many Greeks but was greatly outnumbered. Instead of seeking instant gratification in taking Helen’s life to avenge his city, Aeneas is reported to refrain from it in accordance with his mother’s instruction, who is supposedly a goddess, and who convinced him that greater glory awaited him elsewhere.

He then escaped the burning city, but not before he made sure he could bring his father Anchises, his son Ascanius, and the hearth gods, or Penates, with him. He felt he was not worthy to touch the Penates with his hands full of battle blood, so he asked his father to do it. He even cared about his servants by instructing them how to escape. If he had been more fortunate or more caring towards his wife Creusa by not letting her follow him at an interval behind but, perhaps, by his side instead, he might have been able to save her as well. Still, he risked his life and plunged himself back into danger to look for her. He sadly left after finding out she was dead. The flight from the city proves Aeneas’ leadership and careful planning even in the face of adversity.

He then embarked on a mission to set sail to Italy, for which he believed he was destined. However, it is reported that the journey to his destination was long and hard, much like that of Odysseus. Aeneas landed in many places. The sources mention Thrace, Delos, Crete, and so on. In the Strophades Islands, he had an unpleasant encounter with the mythological creatures called Harpies, who prophesied that he would not arrive in Italy until he and his men were so hungry that they would eat their own tables. The voyage took him to many other cities. His father Anchises then died in Drepanum, a northwestern city in Sicily.

Then, they sailed to Carthage, a city in Africa which would later become the arch enemy of the Republic of Rome. Aeneas there met with Dido, the queen of Carthage. It is said that Cupid made Dido fall head over heels in love with Aeneas. They lived together as lovers for a while until Aeneas decided to leave for Italy again. Virgil’s narration explains that the gods reminded Aeneas of his duty. Despite being in love, Aeneas prioritized his fated duty and set sail again. This led to the tragic suicide of Dido, who was heartbroken upon learning that her lover had left. The curse of Dido before she died explains the enmity between Carthage and Rome later during the time of the Roman republic. Once again, Aeneas did not pay enough attention to taking care of his woman. He could have let Dido know in order to, at least, alleviate her emotional suffering. Perhaps, they might have figured out a solution had Aeneas informed Dido of his departure beforehand.

After Aeneas left Carthage, he landed in Sicily again. While he was there, he held funeral games in honor of his father, which was in accordance with mos maiorum. Finally, he reached Cumae, a city in Italy. As a pious man, he sought guidance from a prophetess. Virgil obviously speaks to the Roman audience when he tells them the story that comes next about Aeneas’ journey in the Underworld. There is no historical evidence for it but The Aeneid itself and oral tradition. However, the narration adds to paint a clearer picture of his character. For example, after he had seen the wandering souls, he became more aware of the moral obligation to take care of unburied fallen soldiers. He piously honored this commitment by agreeing to a truce later when he was fighting against the Latins; for he believed those men should be properly buried, be they his friends or foes.

The second half of Virgil’s narrative focuses on Aeneas’ struggles in establishing his new homeland in Italy. King Latinus welcomed Aeneas and his men, but a man named Turnus conspired with Latinus’ wife to oppugn him. Aeneas then had to seek for military auxilium and formed an alliance with Evander, the king of Pallantium. Evander sent his son, Pallas, to fight along side with Aeneas. In a battle, Pallas was slain by Turnus, who also took Pallas’ belt as a spolium. Aeneas wept and mourned the death of Pallas. He also arranged escort for the corpse in an honorable manner. This event was tragic to him. It can be compared to how Achilles mourned the death of Patroclus. As a matter of fact, when Aeneas won against Turnus in combat later and almost decided to spare him, Aeneas was filled with furor and killed him mercilessly upon catching sight of the belt of Pallas. It is hard to blame his change of heart, for he loved Pallas dearly. Still, this shows how he was subject to personal emotions, especially furor, despite him being very compassionate to the sufferings of others.

Of Aeneas’ death, nothing is mentioned in Virgil’s account. According to Livy, Aeneas founded a city named Lavinium, after his wife Lavinia, who was the daughter of king Latinus. His tomb is situated on the bank of the Numicius. Livy also identifies the epithet of Jupiter Indiges with Aeneas, which means that he was deified. Generations after Aeneas should contemplate on his life and learn to imitate his piety, to sort out their priorities, and also to not submit to emotional impulses.

The life of Aeneas should remind us of Romulus. They are both princes who laid the foundation for the Roman people. They both possess the qualities of a leader. The most striking similarity in their character is their virtue of religious piety. Romulus even killed his brother Remus when he committed a disrespectful act against the ceremonial ritual of founding a city. This attitude of piety is also seen in Aeneas when he piously left aside his own emotions to prioritize obeying his fate. Unlike Romulus, Aeneas also emphasized family ties. Thus, Aeneas deserves to be considered a Roman hero despite his personal shortcomings.

The little history of the world

The Hierarchy of success?